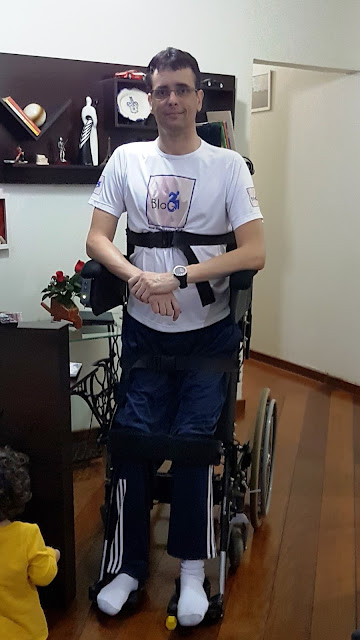 Oh My God, the wheelchair stood up!! For a long time, this is not impossible, nor is it new. For six months after my injury I have been standing using orthosis. The first time I stood up after the injury was in an orthostatic machine at Sarah Hospital. And it was the first embarrassing moment I experienced. The machine is composed of a platform that looks like a pulpit, to which we approach in front, hold the knees and a band is passed under the hip. Then just turn on the machine and it pulls the band and lets you stand up. The only difficulty is to pass the band behind the hip, we have to raise the body to allow it to be placed behind. Very practical and simple to operate, so but at this time I had no sensitivity or control of basic needs. As the machine pulls the entire band, it presses the hip and the belly against the platform to stabilize the body. At the end of the process, it was only a squeeze on my belly for my basic needs to work. And some “little balls” appeared behind me… 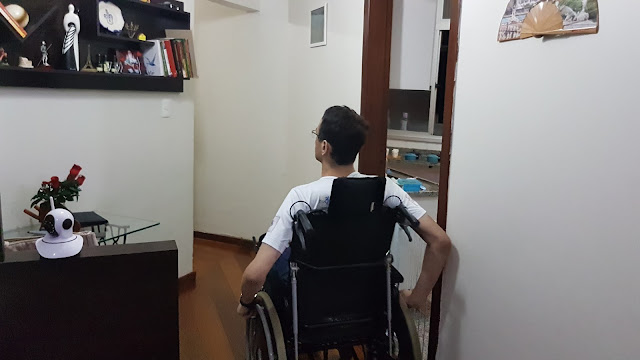 A wheelchair user usually depends on someone when they need to pick something up.

After this embarrassment, Sarah’s staff made me a pair of plastic orthosis in the shape of my legs. With them, I could stand upright using any bench, window or firm support, just put the orthosis and pull the body up. I started doing physiotherapy at home, and using the bed headboard as a support, I would stand three times a week at home. Some time later, I started physiotherapy at the practice, and I stood up with those ladder-shaped bars near the wall. And then when I started the hydrotherapy, everything was easier because standing in the pool is much better because the weight of the body decreases in the water. Besides of that, it does not give you the dizziness that you feel when you stand on the ground. 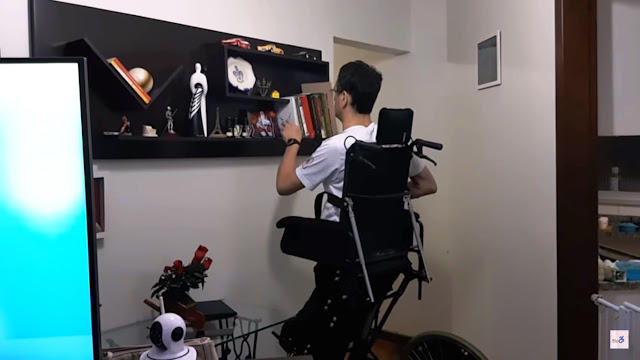 With Stand Up wheelchair, this is over!

As my orthosis were at Aquafisio BH, where I do hydro, I ended up not staying at home anymore. Until I found out a simpler and more similar form to Sarah’s machine, the Stand Up wheelchair, which uses an electric system to raise the seat and back of the chair to the standing position – or rather, almost totally standing, as it is necessary to stand in an angle of less than ninety degrees so as not to flip forward. The first one I saw was at Reatech in 2009, motorized, which even allows the wheelchair user to stand up. It’s very interesting, I saw a guy running with it upright and I found it something extraordinary. The solution to go to parties, where most people usually talk standing on their own feet, and we, people who use wheelchair, keep trying to get into the conversation by stretching our necks. But I went to see the price of the equipment and almost fell back, at that time it was more than fourteen thousand reais (today it is already more than 15,000).
Since it was neither useful nor feasible, I gave up. Until 2014, when I found out that there is a cheaper model (not that much, after all, it costs around 6,000), the hand-operated Stand Up. It is a common wheelchair, with rings to touch the wheels, but has the system that leaves the wheelchair user standing. A few months later a friend of mine, Cristiano, bought one, and I wrote an article here on the blog about it. Time passed, and I ended up doing another orthosis to stand up at home. So, I would not stay for long without standing, as I was only going to hydrotherapy once a week. 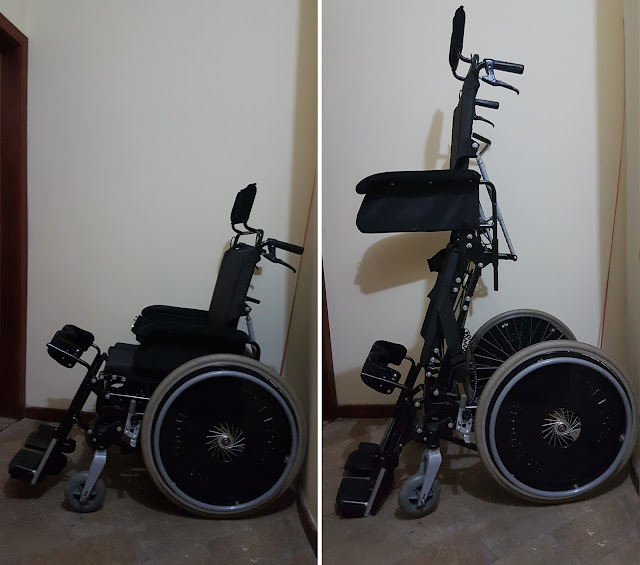 From sitting to standing position in a few seconds.

But one day, browsing on Facebook, I saw that a wheelchair user in the state of São Paulo was selling an old hand-operated Stand Up wheelchair for a little more than two thousand reais. I contacted him, we arranged the freight and deal closed. It arrived in one week. I was a little afraid of buying an old one, but luckily it was in good condition, everything worked perfectly, except for the battery, which I had to change, but the seller paid for it.
I started using the wheelchair and it does what it promises, puts the wheelchair upright. As I said before, it is not totally vertical, we get a little behind, but it does not disturb anything. It does the most important things, weight discharge on the legs, and it allows me to reach anything at the top – in my case it is anything, since I am 1.95m [6’5 ft.]. With it I can reach suitcases at the top of the closet, anything on a high shelf, glasses and pots that are stored on top. I was even able to replace the lamp! See below the review on my channel.

Is it worth to spend almost six thousand reais just to stand up and reach some places? Yes, it is. If you have this amount available, it is worth it, because it is not only to reach, it is important for health, because over time the bones will weaken, and standing will keep the bones more intact, making the weight discharge on they. But it is not just buying and standing up, you need to make an appointment with a physiotherapist and orthopedist to see if you can stand, one of these professionals will request a bone densitometry examination, which will check the strength you have in your bones. If you have not been standing in your chair for years, you may already have weak bones and it can be dangerous to stand up like this. Click here and read the story I wrote about orthostatism below, and always consult your doctor before doing any activity!